Defence Minister A. K. Antony has issued a warning to the UDF government in Kerala by expressing his anguish over the situation in Kerala at a function of Indo-Russian firm BrahMos Aerospace in Thiruvananthapuram.  The Defence Minister said that though Chief Minister Oommen Chandy and P. K. Kunhalikutty have been asking for projects for the State, he was not courageous enough to locate any project in Kerala after the UDF government came to power. 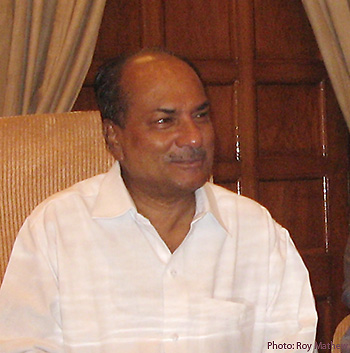 Defence Minister A. K. Antony in his office in New Delhi

Though Antony did not say it directly, he was warning that the Congress led coalition in the State (UDF) would not be able to retain the seats it had won in the last Lok Saba Elections unless its performance improves. It is significant that his warning comes at a time when Prime Minister Manmohan Singh has reshuffled his Cabinet with a view to the elections due in 2014. As the Number Two in the Union Cabinet, Antony has to see that the Congress performs well in the next elections.

The UDF had won 16 seats in the last Lok Sabha election out of 20. Every school boy knows that the Front would not be able to retain them in the next elections under the present circumstances, not to speak of winning more seats.  When he was the Chief Minister in the State, Mr. Antony had not been able to lead the Front to a victory in the Assembly elections. As Union Minister he wants to be one who has contributed to victory of the Front in the next Lok Sabha elections.  However, he is admitting that he was unable to do anything for the State because of the situation in the State. He was not getting the cooperation he wanted.

It is also notable that Mr. Antony praised the (previous) LDF government in Kerala. He knows only too well that the Congress will have to fall back on the Left too if it did not win enough seats to form a government at the Centre.  So, he is building bridges. It is also a fact the previous government had facilitated establishment of defence projects in the State.

Antony could also be concerned about a number of other issues.  There is growing discord among the ruling Front constituents. They are even making unethical bargains. The front could lose votes if Congress played to their tunes on some of the controversial positions they are taking. There is also considerable discord in the Congress. The proposed reorganisation of KPCC is getting delayed. All this should worry Mr. Antony more than anyone else. So, it is not surprising that he has fired a salvo against the UDF government, though he is unlikely to repeat that as elections come closer.  The crucial point is how far the Congress and UDF constituents in the State would heed his warning and act in larger interests.

Tailpiece:
Above all these, there is a personal factor to Mr. Antony’s criticism. Image-conscious Antony is hurt by the fact that allegations had been raised over the take over the Kerala Hitech Industries by joint venture Brahmos Aerospace and that neither Mr. Chandy nor Kunhalikutty had come to his defence. In fact, the INTUC unit in the company joined hands with the AITUC union which raised the allegations. Mr. Antony would not have voiced his concerns openly but for this factor. His remarks stemmed from personal hurt and diminishing influence in Kerala politics. (Revised and tailpiece added as post script on 17/11/2011).

Congress leaders in the State would not countenance lateral entry of leaders into the party that would affect their chances. The only one they would willingly or grudgingly tolerate is Rahul Gandhi. Recall the bitterness that the entry of Shashi Tharoor generated in the State unit despite the credentials he presented and the support of the high command. 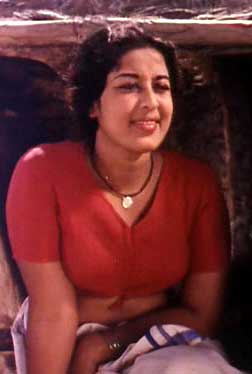 Sheela went to none other than Defence Minister A. K. Antony, apparently thinking that he is her best bet. Mr. Antony and his wife warmly received her but cold-shouldered her proposal referring her to KPCC president Ramesh Chennithala. Can Ramesh Chennithala afford to spare her a Rajya Sabha when all the UDF constituents are warring for seats? Can he even think of fielding her in the next elections?

And can she win an election from Kerala? That she was the heartthrob of the older generation on the silver screen is not sufficient for her to get electoral support in Kerala. Even the evergreen hero Prem Nazir could not do that in his heydays, that too despite being sponsored by K. Karunakaran. If one should know the gravity of his failure, remember that Karunakaran was one who had managed to make non-entities like A. Charles and M. R. Raghuchandra Bal to win elections and get foothold in the party.