The Save Kurinji Campaign was started by a group of youngsters in the eighties against destruction of the shola grasslands of Munnar and Palani Hills and its flagship species neelakurinji (Strobilanthuskunthiana) which flowers once in 12 years.

The first of its campaign march from Kodaikanal in Tamil Nadu to Munnar in Kerala was inaugurated by none other than Zafar Rashid Futehally (1920 – 2013), Indian naturalist and conservationist best known for his work as the secretary of the Bombay Natural History Society in 1989.

The campaigners marched from Kodaikanal to highlight the loss of sholas to plantations of eucalyptus, wattle and pine. Besides the Save Kurinji Campaign Council, those associated with the campaign included the Palani Hills Conservation Council and High Range Wildlife Preservation Association. This led to increased awareness about the importance of sholas and their flora and fauna. Campaign marches and other programmes were organised in the subsequent decades also.

At that time there was few studies about sholas. But soon there were several, including a book on shola forest published by the Kerala Forest Research Institute.The studies and campaigns led to stoppage of eucalyptus plantations in Kerala and Tamil Nadu though those planted already continued to affect the ecosystem.

In 2006, the campaign met with its major success with the LDF government declaring 3200 hectares of kurinji habitat near Munnar as Kurinjimala sanctuary for protection of kurinji and its habitat. The then Forest Minister Benoy Viswam took special interest in conserving the habitat. Before that, the UDF government led by OommenChandy had cleared the area of ganja cultivators and set up a forest station at Kadavari. The Palani (Kodaikanal ) wildlife sanctuary was formed in 2013 by Tamil Nadu government.

The Eravikulam National Park in Kerala was already a protected area for conservation of shola grasslands. The Year 2006 was a year of flowering of kurinji in several areas including the Park. The Forest Department paid special attention to keeping the Park free of fires in summer. Protective measures were also extended to the newly formed Kurinjimala sanctuary. This helped in maturing of the seeds of kurinji and its propagation. The results are expected to be seen this year when the kurinji plants in these areas are due for their next cycle of flowering (between July and October).

As phase of the next phase of the campaign, those who participated in earlier save kurinji marches and younger nature lovers will be gathering in Kodaikanal on June 1 to 3 to relive the memories and chart out campaign for consolidation of the gains. As done in 1989, they will be going around the Kodai Lake to mark the beginning of next phase of campaign. 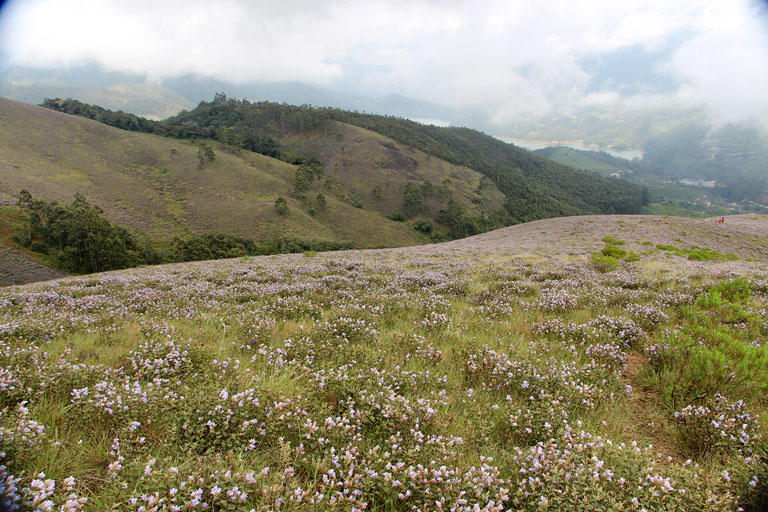 Kurinji in bloom on hill slopes near Munnar in 2014

Tholkapiar sang centuries ago about neelakurinji plants that blossoms like a carpet over the mountain peaks once in 12 years. Today, that plant is part of a threatened ecosystem—the shola grasslands.

In September 1989, a group of nearly 40 men and women set out from Kodaikanal on foot to have a look at the plant and campaign against its destruction. They included members of the Palani Hills Conservation Council, Kodaikanal; Asambu Greens, Trivandrum; and a host of nature lovers and activists. The march led to the formation of the Save Kurinji Campaign Council soon after. This year marks the 25th anniversary of the march. The participants of the march will be gathering again in Kodaikanal on October 2 to commemorate the jubilee. There will also be a meeting in Munnar on October 4.

Neelakurinji (Strobilanthes kunthiana) is a shrub that used to grow abundantly in the shola grasslands of Western Ghats in India. It flowers gregariously once in 12 years. However, on different locations, the flowering may take place in different years. Thus, kurinji has flowered in some areas of Munnar and Kodaikanal from July this year. However, it will flower in places like Rajamalai and other parts of Eravikulam National Park only in 2018. (The last flowering there was in 2006).

Once, kurinji used to cover the entire Nilgiris like a carpet during its flowering season. However, now plantations and dwellings occupy much of their habitat. Destruction of shola forests have also reduced its presence in Munnar and neighbouring areas.

The campaign had actually started in the eighties after K. V. Surendranath (then  Member of Kerala Assembly), Dr. Velayudhan Nair, Suresh Elamon, G. Rajkumar and P. K. Uthaman had a rare glimpse of gregarious flowering of kurinji in shola grasslands between Kodaikanal and Munnar, most of which were soon after converted into pine plantations. The campaign was also prompted by destruction of the habitat by fire and encroachments.

After the 1989 march, the campaign continued through the past 25 years. Several marches, exhibitions, talks and programmes were organised. One of the prominent marches was one that was held in 1990 when kurinji was in full bloom at the same locations as they are now. There was also a major march in 2006 and programmes in connection with the formation of Kurinjimala Sanctuary.

The campaign had contributed significantly in crystallising the idea of a sanctuary to protect the kurinji habitat and release of a commemorative stamp on kurinji in 2006. The blooming of neelakurinji and the need to protect its habitat got media attention thanks to the campaign. During 1990 and 2006, thousands of people flocked to Munnar to see the kurinji bloom and a kurinji fest was organised by the Government at Munnar in 2006.

The Kerala Government notified part of the habitat of kurinji (shola forests) as the Kurinjimala Sanctuary in 2006. It comprises of 32 square kilometres in the Kottakamboor and Vattavada villages in Idukki district of Kerala. The declaration of the sanctuary was made by then Minister for Forests Benoy Viswam at the Neelakurinji Fest at Munnar on October 7, 2006.

The sanctuary is contiguous to the Chinnar Wildlife Sanctuary and Anamudi and Pampadum Shola National Parks.

The Government notification said that the sanctuary would ensure the long-term protection of the entire biodiversity of the area, especially Strobilanthes kunthiana and its habitat. Private land holdings having titles in the villages are excluded from the sanctuary area.

You may also want to read my original report http://kurinji.in/march.html on which this post is partly based.